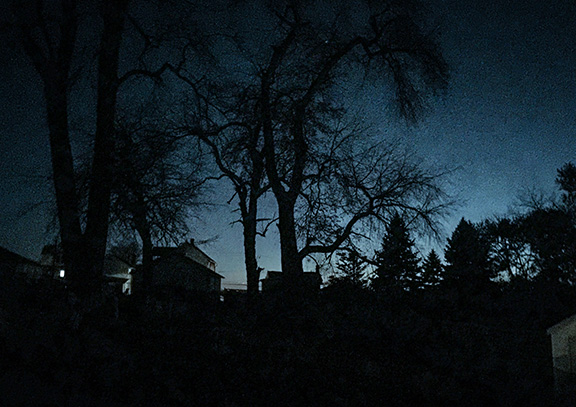 #4 from the series. Can’t seem to recover numbers two and three. I’ll keep digging. In the meanwhile…thank you Internet Archive Wayback Machine for saving these. I will donate to the cause when I have some shekels to spare.

During that time I when I was still living at home with my family, there were two distinct and separate incidents that early on shaped my belief that shit happens and you have to cope. I remember them both vividly, though they happened 50-ish years ago, so that should tell you something.

Both happened at night in my childhood bedroom. It was 9 x 12′ with a cheap green carpet remnant on the floor, beige walls, and [at the time] a metal-framed twin bed, of the sort you see in Victorian hospitals in movies and on TV. It was painted brown and squeaked with the slightest provocation, so it made my “coming of age” years a treat. As a child, it was great for playing “Wild, Wild West” because you could twist and move the bars, pretending to escape the clutches of Dr. Loveless–whether that was a jail cell or a similar bed, or you could blow it loose with plastic explosives from the heel of your cowboy boot.

The squeaky bed was positioned beside the door to the upstairs hall, so when I lie there, I could look down the hall past my sister’s doorway on the right, the attic doorway on the left [which led to the lair of my older brother, the coveted attic room], finally to my parent’s doorway at the end of the hall.

My room also had two windows, one exactly opposite the bed, on the wall that overlooked the neighbor’s house and just the beginning slope of their back porch roof. The other looked out over our back porch roof, and if you were nimble and brave [I was neither], you could slither out and down the porch posts and take a midnight skinny dip in a neighbor’s pool, or just escape into the night.

The neighbor’s back porch roof was close enough to jump to if your nerves held and you got a running start. It benefited from lattice and wrought iron corner posts, good for climbing. The lattice was home to honeysuckle flowers, yellow and white, and we would pull the stems from their trumpets to drink the single drop of nectar that would issue forth. Our neighbor’s mom, Dixie, would yell at us in her gruff, nasal voice to, “Leave some for the bees!” and shoo us away with her broom. She usually had her dirty-blonde hair done up in pin-curls and wrapped in a 50’s headscarf of the sort favored now by tattooed hipster mamas. It was all very Jim Nightshade and Will Halloway, for those willing to risk their souls for a glimpse inside the dark carnival.

On the night in question, the night of the first formative thing that happened, I lay awake in bed facing down the darkened hall, listening to the varied susurrations of the night, when shapes start to form at the end of the hall by my parent’s door. I was 6, maybe 7. As I watched, short, child-sized, unevenly colored like the snow on a blank television channel [if you even remember what that looks like]. Sparkly, but dark on dark, like someone playing with sparklers behind layers and layers of black cheesecloth.

The first moved slowly down the hall but somehow remained in the same spot by my parents’ door. Like watching super-fast motion played back at super slow speed, they were blurs of fast motion creeping toward me at a snail’s pace. By my sister’s room now, just 4 or 5 feet away.

I didn’t scream because I wasn’t sure if it was real, or if my eyes and the dark were playing tricks on my eyes, because they looked rather like the phosphenes you see when you rub your eyes, just dark and walking or floating toward me.

Just outside my door now.

Something like a hand grasps the door jamb. Something like a head crosses the threshold. Then something is by my bed and I’m screaming and it’s my mother shaking me awake, repeating over and over, “you had a bad dream, it was just a bad dream.” Me snuffling about my chest hurting and how they put a thing like a little doorway on me, and when they opened the door, instead of a Mystery Date, it was my guts inside–my hearts and lungs and ribs. “They must have been little doctors come to help.”

I never figure out what they came to help with, and I’ve never forgotten that night.

Was it a bad dream? Probably. Or some hypnagogic combination of sleep and wakefulness combined with phosphenes and childish imagination. I’ve also been told it’s a “classic alien abduction scenario.” My mother’s vague memory of it was that I was sick at the time, cough or croup or somesuch. So I could have been high on Codeine, too, for that matter, or Rock and Rye. It certainly would explain the “little doctors come to help.”

To this day, I don’t like sleeping near the door, and I cannot fall asleep without the television on for a ghost light and companionable sound. Take that how you will.