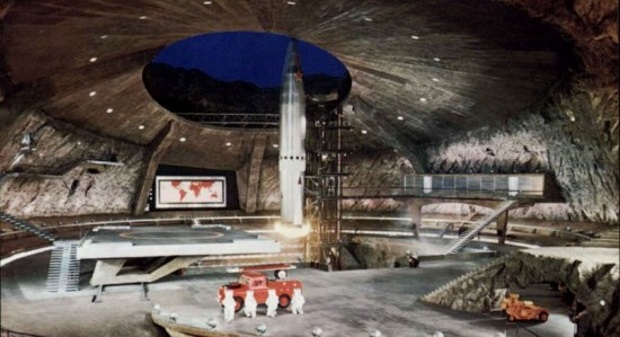 Spooked! By the Fifth!

THE fifth, never spooked by A FIFTH. Anyway. This one was published in May of 2016. I don’t recall what was going on then that was bringing all this stuff to the surface again, but it seems to have come gushing forth. Maybe it was the disembodied crying in our dining room that started it…

In my last post, I alluded to two formative horror events early on in my life. The first one, explained in Episode Four, was the matter of the wee shadow men who haunted me one night and creeped out my dreams for a long time after. The other was a more manly sort of horror. A dream, true, but one that will forever and always be associated in my head with the manliest of men, James Bond, 007, as played by Sean Connery in You Only Live Twice.

Bond shaves his chest to pass for Japanese and infiltrate the volcano-based lair of Ernst Blofeld [played by the inimitable Donald Pleasence] and his cat. My brother and I went to see it at a matinee, probably walking down the railroad tracks to the old Roosevelt Theater in Green Ridge Corners, where, in the summer you could catch a double-feature for a quarter.

The movie came out in 1967, so I was at best 6 years-old at the time, maybe 7 if it was on the double-feature circuit the following summer. We probably lied and said we were going to see Flubber or some other harmless Disney pap and went to see the guns and boobs extravaganza that Connery’s Bond.

These were the days before movie ratings, as such, and hardly enforced. I snuck out and saw some doozies on my own, including some Italian barf-bag horror movies that would have crushed a less inherently spoopy child.

Barf bag movies were especially gory, and the gimmick was, you got a barf bag with your ticket in case the movie got to you. In Mark of the Devil, for example, you can watch Herbert Lom rip some poor girl’s tongue out while she spews tempera paint blood. Good times! There was quite a spate of them in the 70s from Italy.

There was one I would love to see now with adult eyes, but I can’t for the life of me remember the name. [I think it was Horror of the Blind Dead, but maybe not.] Something about monks raising skeletons from the dead, then the skeletons go on a bloody rampage eating people.

Nonsense, of course. No stomachs. But grisly awesomeness when you’re a precocious pre-teen with a pocket full of change and an endless summer spooling out before you.

Anyway, in the course of You Only Live Twice, Bond gets captured and tortured to learn what he knows. Part of the torture was Blofeld, or some shadowy thug, threatening our hero with a needle going straight for his eye! A MOTHERFUCKING NEEDLE GOING INTO HIS EYE! Shown, of course, from Bond’s manly perspective so watching it, you feel like it’s a needle going straight into your own eye.

It gave me literal nightmares. I dreamed for weeks after that shadowy figures had me strapped to a table in one of those round, chrome super-villainy sort of interrogation rooms, with super bright lighting so you can’t see who’s doing the questioning. They wanted some sort of esoteric knowledge from me, of the sort, only know to 6 or 7 year-olds, but I wouldn’t tell. Never! NEVER TELL YOU! Hahahahahahahaha!

I might wake up screaming, but they’d never get whatever that information was from me. My lips were sealed. Except for the screaming.

But Johnny, you say, this is fairly standard movie fare. Granted, you probably shouldn’t have been watching this particular movie at your age, so you deserve what nightmares you got. Nah nah na-boo-boo, stick your head in doo-doo.

I happened to catch You Only Live Twice as part of some Bond marathon on AMC, or TMC or one of those, and I’m all, “I wonder if this will still scare the shit out of me now that I’m all grown up.” So I pop some popcorn and hunker down to watch it. And I watch and watch. And there’s no scene where Bond gets strapped to a table in a round metallic room while shadowy villains try to get information from him by jabbing him in the eye with needles.  Nothing even remotely like that [well, he’s threatened by a chick with a scalpel of some sort, but he winds up using it to cut off her dress before sexy time].

So where the fuck did those dreams come from?

I didn’t have a fear of needles [well, at least not until the day after that dream]. I didn’t see it in the movie, I clearly remember having seen it in the freaking nightmare. I have no explanation. Others have offered plenty, but “freely asserted is freely denied,” as we used to say in debate club. I have enough neuroses of my own without inviting yours to the party.

Back in the late 1980s, when the Communion alien abduction craze was at it’s craziest, a friend convinced me to see a researcher [I’m not going to name the researcher, so stop asking] who popped me under hypnosis. When I said “light,” he said, “ship.” When I said “needle,” he said “probe.” When I said “silhouettes,” he said “aliens.” When I said, “you’re an idiot,” he was a little offended.

I think that’s called “leading the witness,” and I have no interest in contributing to shitty research.

Like most sane people, I think it’s stupid to believe we are alone in the universe. The odds are against it. If you’re going to tell me alien life forms snatched me out of my bed and shoved a needle in my eye and then covered the memory with Sean Connery, I’m going to need a little more than your say-so. I’m funny that way. Well, I’m “funny” a bunch of ways, but only that one is relevant right now.

Believing things are possible is not the same as believing they are actual. In terms of a god, or creator, or what have you, that’s called being agnostic. In terms of ghosts, or aliens, or bigfeet or whatever, it’s called a healthy skepticism. I won’t rule anything out, but I’m going to need a little more than your say-so.

Anyway. That’s my little psyche self-exam for today. Thanks for playing along.