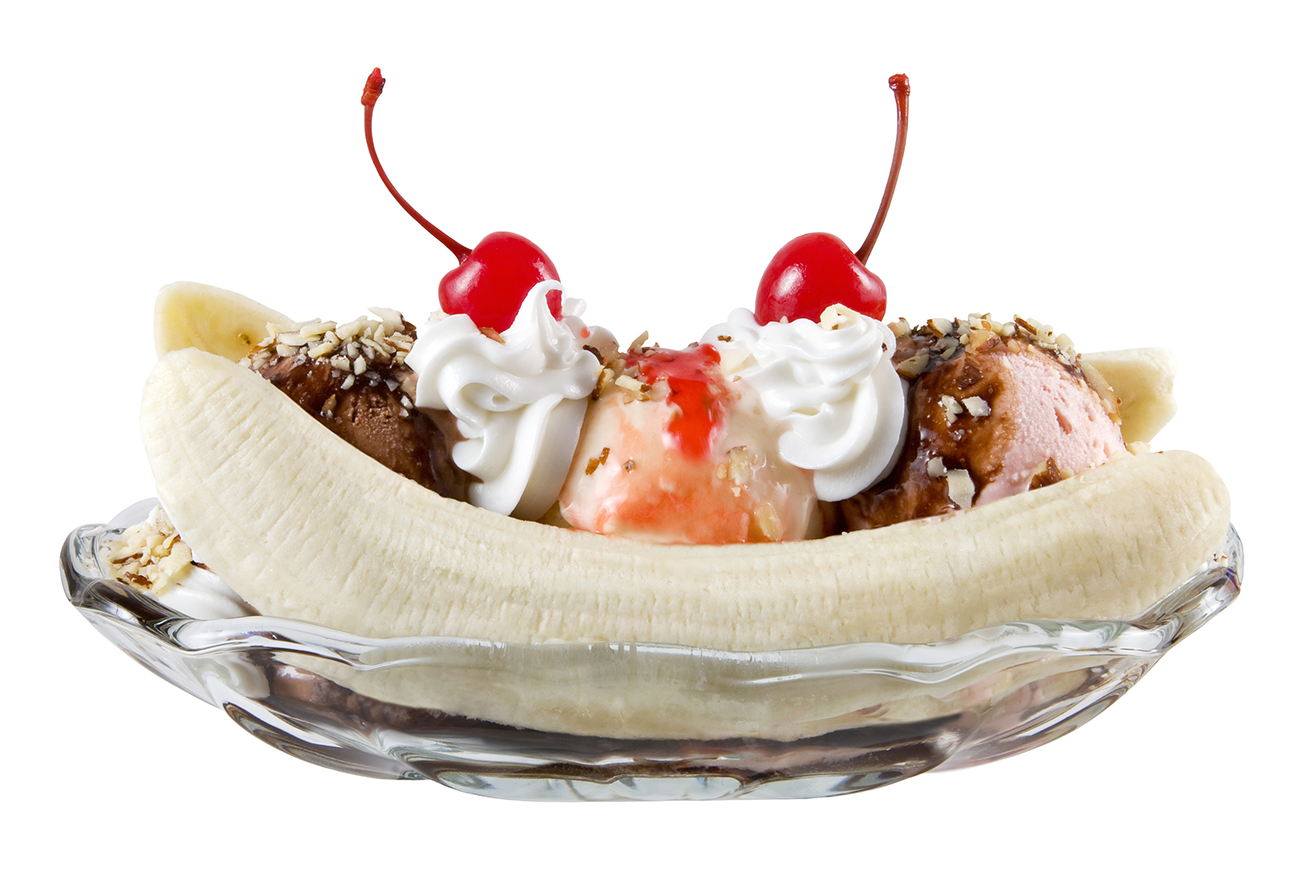 [Originally posted on June 15, 2016, not too long after I started seeing a shrink. Still seeing one. I broke the first one and he retired, now it’s a woman who is, apparently, much more resilient. Good on ya, lady. Still an issue. Still a struggle. I shower more. I get out of bed easier. I crawl in less often and cry less. It’s something.]

Back in the late 80s, early 90s, when I was caring for my then partner who was busy dying of AIDS, our friend Kevin gave me a day off [a very necessary and needed thing] and stayed with Langston while I went to Atlantic City to have some fun. The original “mental health day.”

The first thing I did after the tedious drive from Philly, was have a banana split for breakfast. One, because, why not? Furthermore, when I’m depressed, I eat my feelings [I’m eating them now, actually]. And C.) I was out to have fun, and what’s more fun than ice cream? I mean, cherries, sprinkles and hot freaking fudge.

Today, this very morning, I had cake for breakfast. Leftover cake from the cake I baked Sunday night with the full (and filling) intention of eating the whole thing. I was thwarted by shitty cake pans. The cake stuck, and I ended up frosting the two 9″ rounds in their pans, and eating two cakes seemed like overkill, even for me.

How does the joke go? If you don’t cut it, you can honestly tell people you only ate one piece of cake.

So anyway. After Langston died in 1994, I thought I’d suffered through the worst the world could offer, including the regular, horrifying and agonizing wait to get the results of my own AIDs tests for years afterward.

I was wrong. Life is a miserable bitch, and whenever she sees you having even the tiniest bit of fun, she likes to rain on your parade, piss in your Cheerios ® ™, and basically just fuck you over.

I was rather proud of myself for not falling to shit in 2003 when my dad died. My dad, as you may recall from previous brain farts such as this, was seriously bipolar with mood swings like Foucault’s pendulum–from motionless, head-in-hands sobbing, to magical-thinking manic pixie-ness. During his last hospitalization, he was diagnosed with “smoldering leukemia” which, not too long after, decided to burst into flame and it was a short jog from hospital to hospice to the grave.

Dad’s death was awkward because he suffered so much, and his last psychiatric hospitalization occurred right after he attempted suicide. “Attempted” because we found him and rushed him to the hospital and “saved him.” He got his wish in the end. We could have spared him that last year’s worth of suffering if we’d just let him go when he obviously wanted to, but we couldn’t because we loved him [manic as he was], and he’d chosen absolutely the worst way to kill himself–-he overdosed on a time-released psychotropic that left him alternately seizing and comatose in regular cycles while those tiny little time pills made with their magic brain explosions.

PRO TIP: if you ever plan to kill yourself by overdose, make sure the shit is not time-released. That shit will fuck you up.

Anyway. I mourned, I grieved, I went on with my life. I survived, but I was scarred [as we all are].

One of the things about my family, and I guess all families, is that the genes will out. My mother was a redhead. My hair [when I had it] turned red in the summer. She went gray early, I went gray early. My mother’s father was bald. My father was bald. I’m bald. [My brother started going bald in high school, so thank goodness for a little variation in genetic expression.] We have Type 2 diabetes on both sides of the family, so no surprise when it popped out to say ‘howdy’ when I turned 40.

Yes, John, we get it. Genetics. Duh. Move along.

Well the thing is, after all the fun of, say, having your 40th birthday party used to lure your super manic dad home so the cops could haul him off to the psych ward, and after you’ve watched genetics desaturate then steal your hair, and you look more like your dad every day, and you’re eating cake for breakfast despite the fact that your diabetic, you start to wonder if you aren’t going to show up on the bipolar-go-round yourself someday, reaching for the brass ring.

You find yourself [perfectly justified, mind you] sitting in your chair, sobbing, with your head in your hands, and you think, is this it? Am I turning into my father? And you start to worry about that, so it makes you more depressed. And when you bottom out in these new depths you think, this has to be it, I have never been this low before. But, wonder of wonders, that thought sparks a thought that sparks a thought that sends you lower, and you find yourself thrown across your bed, just staring at the ceiling, petting a cat-like Mrs. Havisham, minus the wedding dress. Then you think, oh fuck. It can’t get any worse.

PRO TIP: Never ever think that it can’t get any worse, because Jesus tap dancing Christ, it can. Just to be a dick, it will.

But it can. And it did. It will continue to do so. So it goes.

In the last few years, I have lost a friend to breast cancer and an in-law to something, I’m not sure what. In just the last year and a half, I’ve lost a brother to a house fire; a mother to grief and the strange chemical tightrope diabetes makes your body walk; another in-law to suicide; and other, less close friends and relations to sudden death and disease. Lets not even talk about heroes and celebrities that I loved who have snuffed it [Kurt Vonnegut bumped his head and died of complications, for fuck’s sake!]. Neither am I lacking for their understudies, friends and family waiting in the wings, with various and sundry diseases and disorders to thrill and dismay. Hurry hurry hurry, step right up! Everyone’s a winner!

I have been clinically depressed for much of the last year and a half. I’ve gained 40 or 50 pounds in edible or drinkable emotions and have little motivation to do more that sit on my ass and maybe write these silly things as a form of self-psychotherapy so everybody can join in the fun. I haven’t been able to work on the book that’s been consuming so much of my life, which pains me. Leaving the house is an accomplishment. Bathing is an accomplishment. I am alternately sad, angry, or numb–spin the wheel and see what prize you get!–and I will literally punch the next fuckface who tells me to smile, cheer up, or [for fuck’s sake] everything happens for a reason.

I have seen that black spiral of “oh no, not my father” over and over, been accused of aggressive or vindictive grieving, attention-seeking, and [because I’m not stupid or unaware of what’s going on] I have sought out illicit psychotropics to try and kick the shit out of my brain, to shake it like the annoying little white trash baby that it is, until it shuts up or just dies of neglect and abuse.

Suicide by cupcake, cupcake. Everybody’s doing it and tastes better than the oily metal taste of a gun barrel in your mouth.

I’m stubborn, not an idiot. I know exactly what’s going on with my own tiny little time pills going off in my brain. I think I’ve demonstrated that here, if nowhere else. I’ve tried everything I know to break the cycle of lather, depress, repeat, that’s happening in my head, and I can’t do it. Every time I get a crowbar into the gap to lever that bitch of a brain over, someone or something comes along and knocks the crowbar out of my hands and I have to start all over. Not even start over, really, because your brain wants what it wants, and if it catches you with the crowbar in your hands, it clamps down harder and sinks lower, making it harder for you to gain any leverage at all.

People on the outside can’t help, because they can’t just listen, they have to solve, to fix, to shove their two cents into the spot you’ve worn a little wiggle room into so you can’t fit the crowbar and you have to start over in another spot. Fuck.

I reached the point where I didn’t even feel like I could pick up the stupid crowbar. So, I picked up the phone, called someone with a better crowbar. Made an appointment at the psych practice where my father had been treated [thought it might save them some time, genetics being genetics]. Speaking of, they did genetic testing to see what meds will be more effective and apparently I “metabolize very well.”

I told the nurse who called with the results, “I’m fat, of course I do.”

Another appointment in two weeks.  In the meantime, I just ordered some new cake pans. So there’s that.

As a sort of PS, this is not a cry for help. I have help. I’m lucky. I have a job with decent insurance that covers it, mostly. Drugs, too. If you aren’t as lucky, or just don’t know where to start, start here. If you’re in Pennsylvania, you can start here.

Good luck, I’m pulling for you.